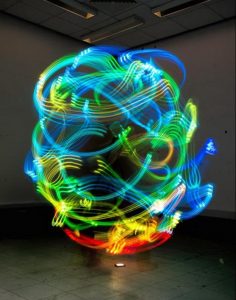 Microwave radiation is emitted from ALL wireless technology including smartphones, tablets, laptops and routers as well as phone masts. This type of wireless radiation, named wifi, bluetooth, 3G/4G, is not emitted from wired devices e.g. those that plug into a socket do not emit radiation. Microwave radiation travels through the body, houses, cars etc., and is historically termed ‘non-ionising’ radiation as it was previously thought to not have biological effects.

Independent organizations recommend ‘safety’ standards for wireless radiation, not government. Over 20 years ago the International Committee on Non-Ionising Radiation Protection (ICNIRP) set guidelines that only apply to heating effect from microwave radiation; guidelines which are still used by today’s governments. The World Health Organisation radiation project is called the WHO EMF-project, and is founded by a ICNIRP member and is ruled by ICNIRP today. ICNIRP members can be found in radiation authorities around the world and the latest EU report from the Scientific Committee on Emerging and Newly Identified Health Risks (SCENIHR) also had ICNIRP members. ICNIRP members go over research and give reports of “no health effects found” in various agencies. They sit in front of the table and behind it, in a key position to judge research based on their own guidelines and downplay any research that shows risk or just not include it in their report.

There is no data which proves wireless radiation is biologically safe, with existing research showing harm. In 2011, WHO´s independent International Agency for Research on Cancer (IARC) classified wireless radiation as possibly cancer causing (Group 2B). IARC classification was based on research that found negative health effects from biological effects other than heating effects. ICNIRP refuses to address biological effects and undermines all research and IARC classification whenever they can. WHO’s 2B possible cancer classification is for all wireless devices based on 2011 epidemiology research, experimental studies, and cancer incidence rates. The 2016 National Toxicology Program (NTP) 25 million dollar study, found the same type of brain cancer in the largest rat study ever made on wireless radiation. WHO’s cancer classification will likely be upgraded from possible risk (2B) to probable risk (2A).

Mobile phones are low-powered radiofrequency transmitters, operating at frequencies between 450 and 2700 MHz with peak powers in the range of 0.1 to 2 watts. Wireless devices only transmit power when it is turned on. The power (and hence the radiofrequency exposure to a user) falls off rapidly with increasing distance from the wireless device. A person using a mobile phone or tablet 30–40 cm away from their body – for example when text messaging, accessing the Internet, or using a “hands free” device – will therefore have a much lower exposure to radiofrequency fields than someone holding the handset against their head (WHO website). Wireless cell phones and tablets emit high levels of microwave radiation due to multiple antennae are seeking a signal ~ 900 times per minute.

A wired connection has no risk.
The most efficient way to minimize radiation is to turn off WIFI and use a wired connection to devices. See https://ehtrust.org/hardwire-ipad-ipod-iphone/ for how to make your house safe.

Routers have the option of a wired connection in the back of the device.
Cable goes from device (laptop/tablet) to router with Wifi OFF. Most tablets and laptops have the possibility of wired Internet connection. Ask your service for a router with on/off switch at the back of it so you can turn Wifi off yourself. If not possible then you must connect with the router through your computer, and set Wifi OFF. https://www.cnet.com/how-to/home-networking-explained-part-1-heres-the-url-for-you/

Remember to set all Wifi, bluetooth connection´s OFF on the devices themselves, even when using a wired device, or else the device is always looking for a wireless signal.

Most laptops and tablets are tested for safety at 20cm distance from body, hence child should never have a tablet or laptop on the lap. If child is streaming on a tablet or laptop it needs to be wired to the router, router with Wifi off, device with connections off. Child can get high radiation when wireless connected tablet is near body. Smartphones radiate the head, tablets the body.

Manual for smartphones state that the device can never touch the body, if it does, then ICNIRP guidelines from risk from microwave heating are broken. The battery gives off electromagnetic field that must be avoided. Wearing a smartphone in the pants pocket or inside bra brakes the safety guidelines. o.5cm to 2.0cm is the distance from smartphone to body that complies with safety from ‘heating’ effect.

Laptops/ tablets emit similar radiation as a smartphone.
When a tablet/smartphone is connected to mast the radiation is very high; radiation from WIFI is the highest when data is uploading, streaming.

Beneficial for child to delay ownership of a smartphone.
Smartphone/cellphone is the highest risk device according to research now available. A smartphone is not only a phone, is a super computer that the child then has all day long, screen use has many negative aspects for children. Preferred are phones only for texting and calling with no internet connection.

If a smartphone is used by a child or a young person, then preferably only for texting or calling, not with wifi or data connection on. Children and young adults should never put a cellphone up to the head or brain, use headphones instead.

If wifi is to be ON, use device in moderation.
If a older child uses a smartphone to play games/use apps when with parents, the preferred way is a cabled phone but if wifi is to be used then the parent must upload games and apps from either wifi connection. Then hand the child the smartphone and put on airplane/fly mode to cut all wireless radiation. Turn off wifi after uploading.

Keep game time in line with screen time rules set by paediatric community.
Remember that a small screen is bad for eyesight as well as posture, larger screens are strongly preferred.

Protect sleep. Always turn off the wifi at night to give the immune system a rest from radiation or unplug the router. Router can also be set on timer and it is possible to have a on/off wifi switch set in the wall.

By Sveinn S. Kjartansson president of the Association of Parents of Pre-School Children that coordinated the international conference Children Screen Time and Wireless Radiation held on Feb. 24, 2017 in Reykjavik Iceland. Sveinn has a BSc in computer science, is an entrepreneur in wireless technology and IT, and is an observer for the Reykjavik Education and Youth Committee, co-owner of Iceland Luxury Tours.

…and Stella Sæmundsdóttir who laid the groundwork for the conference Children Screen Time and Wireless Radiation and is a member of the Association of Parents of Pre-School Children, Stella’s academic background is in psychology, is an avid wireless research collator, previous owned and managed a book store, co owner of Iceland Luxury tours.

Sveinn and Stella can be reached at sveinnk@gmail.com.

Exploring ten myths and facts regarding child mental illness origins and treatment Prior to the Covid-19 pandemic, research studies documented an alarming rise in child and youth mental illness. The long-term effects of imposed isolation of families and removal of family support networks are largely unknown, but early reports during the Covid-19 pandemic indicate an […]