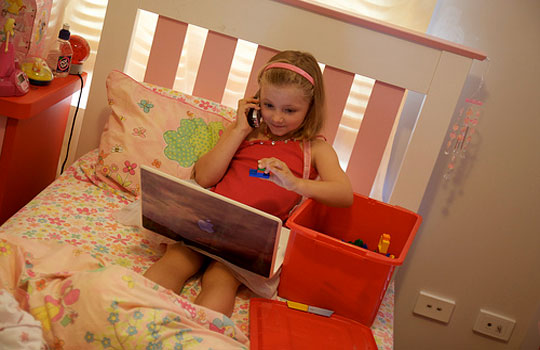 During an assessment, a grade one child stated she “sneaks” her tablet to bed at night to talk with her “new friends”. When asked who these friends were, she responded “I’m not sure, but they say nice things to me and ask me lots of questions”. A kindergartener who could speak of nothing other than video games, drew an elaborate grid of weapon and armour symbols, explaining how each one worked to “blow up” people. Incomprehensible and non-participatory in the classroom, this little boy brought his complex yet very organized virtual world to school where it ruled every thought and action. What was similar about both these children was that they both demonstrated global development delays adversely affecting their ability to pay attention, communicate, and learn, as well as showed little interest in interacting with other children. What was similar about both these children’s parents was that they thought time spent on the internet was educational, and was posing no perceivable harm to their developing brains or bodies. The parents stated that when their children were inside using online devices they were safe, but when outside, were at risk of harm from either strangers, traffic, or wild animals. What does society do when parents are no longer capable of making reasonable decisions to keep their children safe? This article explores the risks parents take when they let their children spend long periods unsupervised on the internet, and suggests a variety of health, education and social government solutions for helping parents manage balance between technology and healthy activities.

The past decade is marked by significant changes in how our children spend their time, posing new risks for safety and well being. Previous time spent running around outside has been replaced by sitting around inside. Imaginative and interactive rough and tumble play is now prohibited, and children who like to move are diagnosed and medicated. Once social and a member of a “pack”, todays child is asocial and antisocial, preferring to spend time by themselves building their image or bullying their classmates on social media. Friendships are virtual texting or chats measured by ‘likes’ and ‘sexting’. Happy and alert children seem a rarity, as society ‘re-norms’ to epidemic levels of child sleep deprivation, mental illness and suicide. Industry driven, non-evidence based education technology is replacing teaching the basics, making literacy unachievable. Making a hopeless situation worse, National Toxicology Program preliminary findings on wireless radiation show causal association with brain cancer, posing imminent harm in children. Yet…parents and teachers around the globe continue to ramp up technology usage at an alarming rate.

The American Psychological Association recently released study results showing a whopping 86% of parents report chronic, constant checking of their devices resulting in significant stress. Over half of the 3511 survey respondents reported feeling their family was ‘disconnected’, and over half reported their children were ‘attached’ to their own device. While the idea that their children are safer indoors on their device is widely held by parents, this illusion comes with a steep cost. Poor parental choices and decisions regarding technology overuse still go largely unnoticed by our society, as technology addictions become increasingly the norm. If indeed parental addictions to devices are out of control, and they are no longer able to see that their children are suffering the consequences, then there is a need for government intervention. It is now time for health, education, and social governments to take action to ensure safe and sustainable futures for all children. Education, regulation and legislation regarding technology overuse families is key, as is creating immediate initiatives in clinic, school, and community settings. Increasing access to healthy activity is a first step toward managing balance between technology use and healthy activities. Successful Balanced Technology Management initiatives require team-based involvement from multiple sectors including parents, educators, health professionals, government, researchers and technology production corporations. Working together we can create sustainable futures for all children.

This article was written by pediatric occupational therapist and child advocate Cris Rowan who can be reached at crowan@zonein.ca. Zone’in Fact Sheet and monthly Child Development Series newsletter can be found on Zone’in website. Cris is author of the book Virtual Child, and the viral Huffington Post article Ten reasons why handheld devices should be banned for children under the age of 12 years.