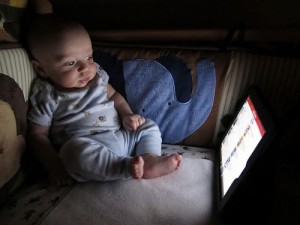 Every parent on this planet knows technology is infinitely harmful to infants and toddlers, yet they continue to flock in droves to the latest technological device as if it were seemingly innocuous and benign. As a pediatric occupational therapist, I incessantly hear parents touting the latest new technology or program for their wee one exclaiming (miracle upon miracle) that their young babe can miraculously push Apps around on a screen. So can cats, but the difference between cats and babies is that cats quickly get bored and quit. Babies on the other hand, continue to mindlessly open frames, while they seemingly “watch” the colored lights and noise. Today’s parents so want their children to be advanced in every way, and consequently think technology is the way to success, when really it is mindless entertainment. Questions to consider are what is the cost to the developing child of detachment from humans and attachment to devices? What price will parents pay down the road when their children enter school with developmental delay, obesity, impaired cognition, impulsivity, and unintelligible speech as a result of technology overuse? What will be the costs to society when male adolescents drop out of high school, and isolate themselves in the basement, playing violent video games and watching endless pornography; or females immerse themselves in the soap opera of Facebook and texting? Have parents truly lost their way when it comes to knowing what is right and good for their children? This article will explore what we already know about the impact of technology on babies, and postulate about why parents are failing to recognize the harmful effects of technology overuse on their young children.

There has been an unprecedented explosion in baby Apps, despite research showing causal links to motor, cognitive and speech delays by school entry. In an article “It’s a Lifesaver” by Kate Silver from Parents Magazine, Silver writes “When Emily Butler takes her 2 1/2 -year-old daughter, Caroline, to restaurants near their home in Washington, D.C., there’s one thing she never leaves at home—her phone. That’s because she knows that it can serve as her lifeline if Caroline gets upset. She simply turns on one of her tried-and-true apps, like Butterscotch.com’s Trancit Lite Edition 1.3 , and the screen fills with swirling colors and images that never fail to engage her daughter through the meal. ‘At a restaurant it comes in handy if your baby is crying’, says Butler, 34. ‘They kind of zone out, staring at the lights. You (and everyone else) get to eat in peace and they get their colors on’. 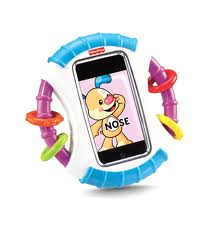 In an effort to make parent’s lives that much easier, there are also a host of mounting devices for iPhones and iPads, prevention necessary attachment formation and bonding?  As the device rapidly replaces the parent, and becomes the soother and opiate for our new millennium child, parents conveniently fail to take notice of the concurrent rise in child tantrums and behaviour disorders. Forgotten is the old world wisdom that parent: child co-regulation leads to self-regulation. An example is Fisher Price’s new Laugh and Learn Apptivity iPhone Case, where baby can teethe and drool while watching their favorite cartoon, giving Mom and Dad time to use their own devices to catch up on email, texting, video games, porn, and social networking. 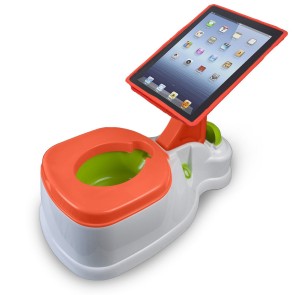 Of course no young toddler could manage without the iPotty, which boasts a removable screen guard should the child get distracted while waiting for the “big event” 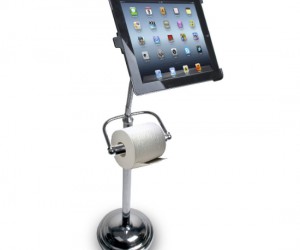 and manage to pee on their parent’s iPad. Over the past five years, therapists report a marked increase in the number of children entering school who are not toilet trained, with parents stating they simply don’t have the time. For the parent, there is the iPad toilet paper holder for those who really need to be connected to their technology throughout their toileting procedure.

For the older child, there is the iPhone case that also acts as a Lego base. For the sports enthusiast, an iPhone clip for the bike, and then of course every family needs an iPhone mount for their car. 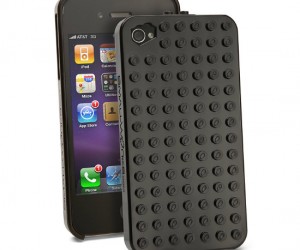 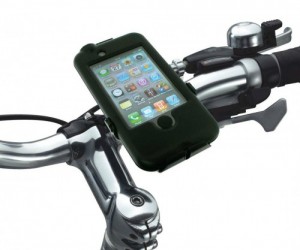 But back to babies. Children need their parents, and in the absence of a connected parent, children will attach to devices. What then? 1 in 11 children between the ages of 8 and 18 years already have technology addictions. Connecting to the virtual world appears to be more desirable than connecting to humans, with studies showing one in three parents prefer using technology to playing with their child.  Let’s face it, for years human relationships have proven complex, confusing, and down-right difficult, resulting in a myriad of self-help books, therapists and divorce.  What is unique about human relationships in the 21st century, is that the performance bar has now been set higher.  To get a little bit of love and human connection, parents and children are now required to compete with the seductive lure of technology, which is threatening the very fabric of family life as we used to know it.  While change and technological advancement can have a positive impact on society, it is unmanaged and unregulated, and the results are devastating.  Family, school, and workplace environments are now on the verge of what can be termed the “Triple Disconnect” – from self, others and nature. Identity and attachment formation can only happen in relationship to others, and is best facilitated in nature based settings, yet connection to technology is causing a disconnection from what we used to hold dear and close to our hearts.

Secondary effects of technology overuse by infants and toddlers can be life threatening. Child accident rates have risen 40% in the past five years, linked to parental neglect from technology obsession. Small infants are increasingly placed for long periods in a variety of potentially harmful devices to provide parents with more time for tech use. Jean MacKenzie, Manager for Powell River Family Place writes “Over the years I have become more and more concerned about the over use of infant swings and strollers. Regarding swings, I am concerned about the speed of swinging and the length of time infants are in the swings, and wonder how this affects an infant’s brain and body development, as well as their ability to self-soothe over time. People say their children like them however, has anyone really looked at the infants’ expressions to determine if that is really true; does the rapid swinging put them into an altered state that looks like pleasure?… and what would they normally be doing e.g. what is the effect of swinging without the human contact element? Regarding the over use of strollers; I see many older children (3-5’s) who rarely move on their own and spend many hours strapped into strollers; are they receiving enough stimulus through their feet, building sufficient muscle strength, and are they building up a residual level of frustration that must find release in other ways?” In response to Jean’s questions constant swinging or bouncing can cause overstimulation to the infant’s vestibular system causing sympathetic nervous system overload of fright or flight. Strollers and swing overuse restricts toddlers and children from essential movement, touch, human connection, and exploration in nature, all critical factors for optimizing child development.

Separating the developing infant and toddler from human contact through technology overuse is threatening the very sustainability of the 21st century child. Human attachment is a biological need, without which, children will die.  For hundreds of years, human beings have lived in family “packs”, with established intrinsic roles, and a life full of meaning and purpose.  While technology was designed for human efficiency, it has also had the effect of distancing humans from each other, diminishing engagement as a family “pack”.  Can human beings adapt to this growing sense of isolation from each other, and what will be the impact on young infants and children who have little or no contact with their parents?
John Bowlby, a British psychoanalyst in the 40’s and 50’s identified that developing children require a “secure base” from which they can move out into the world, yet return to when they feel threatened or scared. Bowlby also describes a second role of the parents, to “launch” their child out into the world for self exploration, self-regulation, and eventual independence from the parent. So the job of the parent is two-fold, to provide their developing child with a “secure base” and also a “launch”. Bowlby goes on to define attachment as an emotional bond between parent and child, which is essential for survival as the attachment bond allows the child to get their needs met (security and launch). Mary Ainsworth, a developmental psychologist in the 50’s and 60’s designed a method to test Bowlby’s theory and discovered three distinct attachment behavior patterns which were categorized as follows:

The impact of technology on primary attachment formation has not received adequate research attention.  What researchers do understand is that fear of intimacy is an underlying causal factor for addictions in adults, and this fear has its origin in failed primary attachment. Researchers have also documented that attachment to technologies such as TV’s, movies, internet, video games, pornography, cell phones and iPads are resulting in a “detachment” from all that is human. Human detachment resulting from technology overuse is occurring at such a rapid pace, it’s difficult to determine what would be the immediate, much less long term effects. One only has to reflect on current child health and academic statistics to know that something is seriously wrong with how we are raising and educating our children. 30% of children are obese, 30% developmentally delayed, 14.3% diagnosed with mental health disorders, 20-30% of children experience learning difficulties, and 1 in 11 now have technology addictions.  All of aforementioned problems are associated with overuse of technology. The American Academy of Pediatrics recommends 1-2 hours per day technology use, yet children 8-18 years use a staggering 7.5 hours per day.

With all this connection to technology, primary relationships are disconnecting, or worse, not even forming at all. Human attachment profoundly influences every aspect of human development: mind, body, emotions, social ability, values and productivity. We know that securely attached infants, toddlers and children have better self-esteem, independence, self-regulation, autonomy, enduring friendships, trust and intimacy, impulse control, empathy and compassion, and resilience. What will happen when Type A and C attachment styles dominate society? What will Type A and Type C parents be like, and what type of third generation detached children will they produce? Relatedness will truly be a character trait of the past, as human beings grow ever more isolated, yet at the same time, ever more needy.

This article was written by Cris Rowan, a pediatric occupational therapist, visionary, and author of “Virtual Child – The terrifying truth about what technology is doing to children”.  You can find out more about Cris’s work and her Foundation Series Workshops the Zone’in website www.zonein.ca, or email Cris at info@zonein.ca. Cris’s book is available on Amazon.com, and her confidence and skill building game Unplug’in is available on her website. Research references can be found on the Zone’in Fact Sheet.

2 Responses to “Babies and Technology – What we know, but refuse to accept”