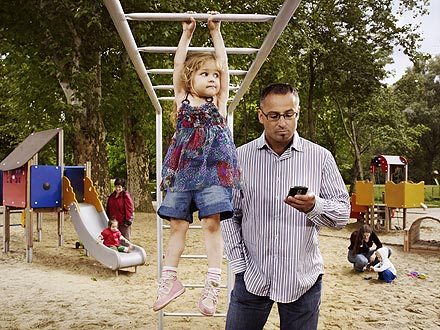 James Steyer with Common Sense Media was interviewed on PBS News on Nov. 2, 2015 regarding a newly released study showing teens spend 9 hours a day being entertained with media. Mr. Steyer cited ‘lack of rules by parents’ as a factor driving escalating rates of cell phone, tablet and TV use in children and youth. So why don’t parents just make some rules for their children regarding technology use? Parents do know how to make rules for other things, like picking up clothes, brushing teeth, and eating vegetables, but seem to struggle when it comes to restrictions regarding technology use. Quite possibly parents have little to no control over their own device use, and consequently are unable to make tech usage rules for their children. Emails, texting, TV, video games, Netflix, YouTube, Facebook, pornography…provide a source of entertainment so alluring, that 39% of parents are using over 11 hours per day of ‘entertainment only’ technology. While family interactions typically are not always enjoyable, in many homes technology has become an interface which prevents human connection, a key component for mental health. Human beings are ‘pack animals’ and when pack members are isolated from their families, they don’t survive. The Beatles said it best in their song “All you need is love”. Loving and being loved is what families live for, its why parents had children in the first place, yet every time a parent puts down their child and picks up a device, they are clearly showing a preference. Ikea created a brilliant commercial recognizing that parents really do want what’s best for their children, but have forgotten that the best, is really themselves. This article explores why parents are turning away from children toward devices, and proposes a variety of solutions to help families find and enjoy each other.

When discussing technology overuse in children, a frequent comment by parents and teachers is “Well…they want it”. But really, do they? Aforementioned Ikea video was pretty clear in showing that children unequivocally want their parents, not a device. When I work with families and mention spending time together without technology, the children grow quiet, and look to the parents, knowing the power lies there. While children don’t jump at the opportunity to ditch the devices, parents are the ones who have much more difficulty accepting the need, and seeing the potential benefits, that come with technology reduction. Following are some of the reasons parents have told me as to why they don’t make technology usage rules for their children.

Parents rarely understand the perils of falling into the ‘virtual hole’.

Children are spending an average of 6.5 hours per day and teens average 9 hours per day of entertainment technology. Project that forward, and by the time they reach 80 years of age, these same children will have spent 17.6 years 24/7 immersed in a virtual world. That’s a lot of time that could have been spent engaged in more healthy activities. Growing a child is like building a house; it’s all about the foundation. Children have four critical components they need in order to grow and succeed: movement, touch, human connection, and nature. Any time spent using technology deprives children of these four critical factors, and is consequently detrimental to their development. Technology overuse is sedentary, overstimulating, isolating, and results in child neglect. The virtual hole is no place to raise a child.

Prior to the onset of handheld devices, if a situation was difficult and you wanted out, you had to leave. Now family members can just pick up a device and leave each other in the privacy of their very own home, without even stepping outside. So handy. What is even better, is when every family member wants to leave each other, as then there is no one left to complain that everyone is on tech. Parents are reporting high levels of stress, have more mental illness, and are taking more psychotropic medication than ever before. If tech is so great at connecting and entertaining everyone, why is everyone so unhappy?

Parents think it is safe indoors, and require their kids play inside.

Bad things sometimes happen to children, and if the news is played over and over, the image of that bad thing gets imbedded into every parent’s brain. Some parents expose young children to the news, and the image of that bad thing gets imbedded into the child’s brain for immediate replay, at any time of day or night. While media is doing their job to convey the news, over the past decade, reporting of events has taken a turn toward sensationalism and extreme drama. When the average attention span of humans dropped to 9 seconds (2 seconds below gold fish), the news feeds sped up, giving parents more and more reason to fear for their children. So parents keep them safe inside, for years and years, with 50% of 20-30 year olds now living at home in their parents basement, not working, and not going to school.

How do you know if you are overusing your device to the detriment of your children? Ask them. Have a screen free dinner tonight as a family, and have a round table discussion about how much technology your family uses. Ask whether it’s too much. Ask if there is something else your family wants to do with you instead of tech. Be there for your family. As much as you want to pick up the device and escape, don’t. You will be pleasantly surprised.

“You want to give them the best you can, but the best, is really yourself” says parent from Ikea commercial.

Cris Rowan is a pediatric occupational therapist, biologist, speaker, and author of Virtual Child – The terrifying truth about what technology is doing to children.

Cris recently released Tech Talks for Families, a ten week webinar series comprised of half hour info and half hour of homework. Tech Talks takes families on a journey of discovery, hope, and pure joy.

Cris’s website is www.zonein.ca and can be reached at info@zonein.ca or 1-888-8zonein.