The recent rise in mass school shootings has resulted in a singular focus on the implement of destruction…guns. While gun control requires attention, as well as eventual legislation and regulation, gun control alone will not stop the escalating incidence of mass school shootings. Careful analysis of multiple factors contributing to mass shootings is urgent and long overdue. This article intends to review data showing four commonalities of recent mass shooters, and review research which identifies video games and psychotropic medication as salient determinants in compiling the profile of a mass shooter. This article includes the School Mass Shooter Risk Inventory to provide important data for educators, health professionals and social service personal to quantify risk indicators for school mass shooters. The School Mass Shooter Risk Inventory should be considered as a prevention and intervention tool to improve school safety for staff and students. Only when government assigns responsibility and liability to the video gaming and pharmaceutical industries for school mass shootings, will the incidence of these horrific events begin to abate.

The U.S. has one mass shooting on average every 16 days, with a total of 271 incidents between 2006 and 2017, killing 1358 victims. The following four components are found in all school mass shooters: long term exposure to violent media content, medicated with prescription psychotropics, lonely, and access to guns.

With the escalating rise in video gaming, extensive research documents concurrent rise in aggression and violence. News reports indicate that all mass shooters are gamers. Extensive research dating back to the 1990’s has clearly documented the causal effect of violent media content on aggression, with the American Academy of Pediatrics in 2009 declaring media violence as a public health risk. The American Academy of Pediatrics reports media violence is causally linked to child aggression stating “Although shootings in schools around the world periodically prompt politicians and the general public to focus their attention on the influence of media violence, the medical community has been concerned with this issue since the 1950s. A 2010 meta-analysis of over 1000 studies on the effects of media violence by Craig Anderson and colleagues, reports statistically significant effects of violent video games on aggressive behavior, aggressive cognition, aggressive affect, physiological arousal, empathy/desensitization, and antisocial behavior.

A 2016 study by Ohio State researchers concluded that “People who have a steady diet of playing these violent video games may come to see the world as a hostile and violent place.” Brad Bushman, professor of communication and psychology at OSU, continues, “These results suggest there could be a cumulative effect” in making video game players more aggressive and violent over the long term as well as over the short term.

Research literature explains the underlying mechanism linking media violence to aggression, which is termed Game Transfer Phenomena (GTP), defined as a physiological state where gamers retain perceptions and act out behaviours endemic in the game. A 2015 study of 2362 gamers between the ages of 18-22 years by Angelica B Ortiz de Gortari and Mark Griffiths from Nottingham Trent University reported the five areas of ‘real life’ human function that were altered following video game play (excerpted from linked research).

90% of video games contain violent content, and 8% of children and youth currently demonstrate an addiction to video games. R. Stickgold et al demonstrated that 7-hour exposure to the video game “Tetras” induced 3 days of visual imagery of falling cubes, even in subjects who had frontal lobe damage and no memory. This fact is striking in not only the permanence of visual imagery, but also the recalling of the visual imagery in the absence of conscious memory. Dr. Andrew Doan, Ophthalmologist and author of “Hooked on Games” reports that the brain is similar to a camera in that it stores visual images, sometimes for years, so parents need to understand that what their children watch will be with them forever.

Aggression acted out as a result of video game immersion is not only of the physical type, but sexual violence as well due to graphic sexual imagery imbedded in gaming. While Statistics Canada reported in June 2017 that overall Canada’s crime rate has decreased by 3%, it’s important to note that violation in child pornography has increased by 41%, sexual violation against children increased by 6%, and youth accused of attempted murder increased by 37%. The viewing of video game pornography by very young children, has born witness to concurrent rise in sexual violence of children against children.

SSRI Stories reports 80% of mass shooters were either taking prescribed psychotropic medication, or withdrawing from same at the time of assault. SSRI Stories is a website dedicated to chronical adverse effects of Selective Serotonin Reuptake Inhibitors (anti-depressants). Constitutional Attorney Jonathan Emord has called for a federal investigation on the link between psychiatric drugs and school shootings. In Canada, one in six children between the ages of 8 and 18 have a diagnosed mental illness, with many on dangerous psychotropic medication (stimulant, sedatives, anti-depressants, anti-anxiety, or anti-psychotics). Toxicity psychosis from prescription psychotropic medication is evidenced by suicide and/or violence. Despite the fact that the FDA and Health Canada concur that to date, there are no known biochemical, structural, or genetic cause for mental illness, North America is consumed with what has been termed a “diagnosis and medication mania”. Children aren’t “born sick”, we make them that way through neglect, abuse and trauma. Additionally, lack of movement, touch, human connection, and nature, the four critical elements for healthy development and learning, have resulted in a rise in child obesity, developmental delay, depression, anxiety, aggression, learning disorders, behavior disorders, and hyperactivity. Children are sicker than they have ever been in the history of humankind. Sedentary, isolated, neglected, overstimulated, and medicated, the new millennium child is truly struggling to survive.

On January 22, 2016, a 17-year old boy from La Loche, Saskatchewan in Canada shot 11 people killing four, including two brothers in the shooter’s home, and 7 students and teachers at his school.  The boy was described as a ‘loner and chronic gamer’.  Katherine S. Newman, author of “Rampage: The Social Roots of School Shootings” reports that the profile of recent mass shooters was not necessarily one of a loner, but rather of a young man who felt ostracized by a group in which he desperately wanted to fit in. The shooters all made attempts to tell their coveted group what they had planned, but were ignored and not taken seriously, escalating their desire to act.

A popular quote is “Guns don’t kill people; people kill people”, yet people without guns, or people with hunting rifles, don’t become mass shooters. That said, presently there is one gun per person in the U.S. and rapid-fire assault rifles are legal in most states. The 21st century is known for its pervasive fear mentality and gun obsessed culture, both of which have proven extremely deadly. While access to guns alone is unlikely to produce a shooter, combine guns with desensitization resulting from excessive exposure to violent media content, a cocktail of psychotropic medications from an early age, along with isolation and decreased socialization, and we are getting closer to the target of a shooter.

The video game and pharmaceutical industries are strong and formidable forces, which explains some of the dilemma and delay in legislation regarding restriction of video games and psychotropic medications with by children. The problem of mass shooters is complex, and will not be resolved quickly or easily with gun control measures alone. All systems including government, law enforcement, education, health care, and social services industries need to work together in enacting preventative measures to reduce previously mentioned risk indicators for school mass shooters, as well as intervene immediately to identify who is at risk for becoming a mass school shooter to provide necessary assistance and therapy.

Improving student and staff safety in schools requires a preventative approach be enacted immediately. Effectively analyzing potential shooter risk through assessing the following who, what, when, where, why and how risk indicators on the School Mass Shooter Risk Inventory, could act as a first step toward preventing future school mass shootings.  The School Mass Shooter Risk Inventory was designed by Cris Rowan, a pediatric occupational therapist and biologist and expert on the impact of technology on children. Cris works daily with children and youth who overuse technology, and has compiled a comprehensive research referenced Fact Sheet available on her website www.zonein.ca. Cris speaks internationally on the subject of impact of technology on children, and authored “Virtual Child – The terrifying truth about what technology is doing to children” book. 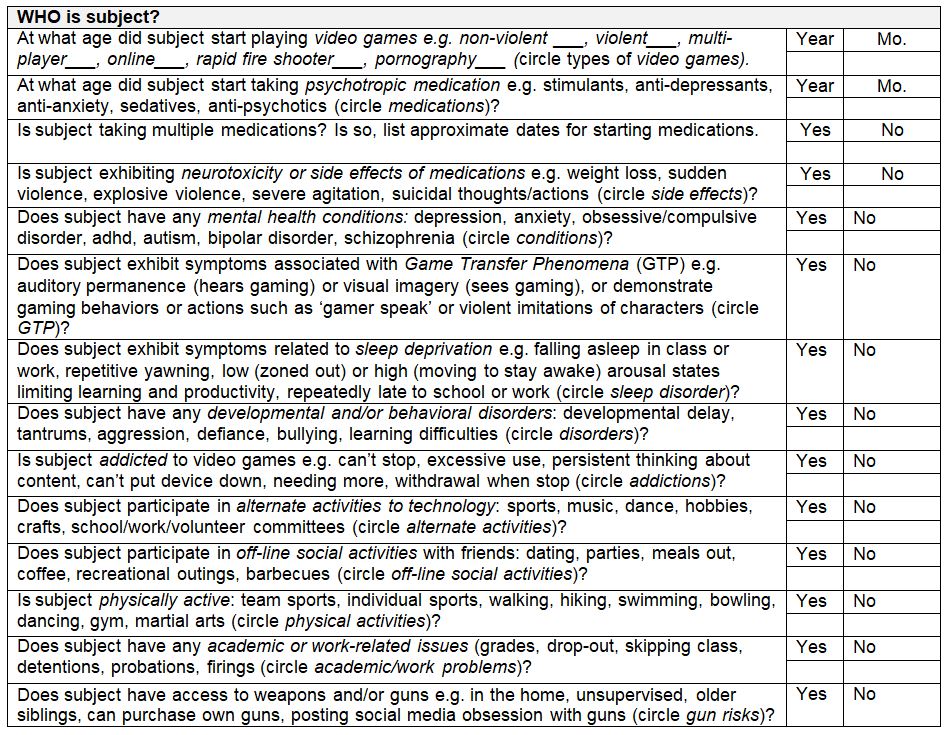 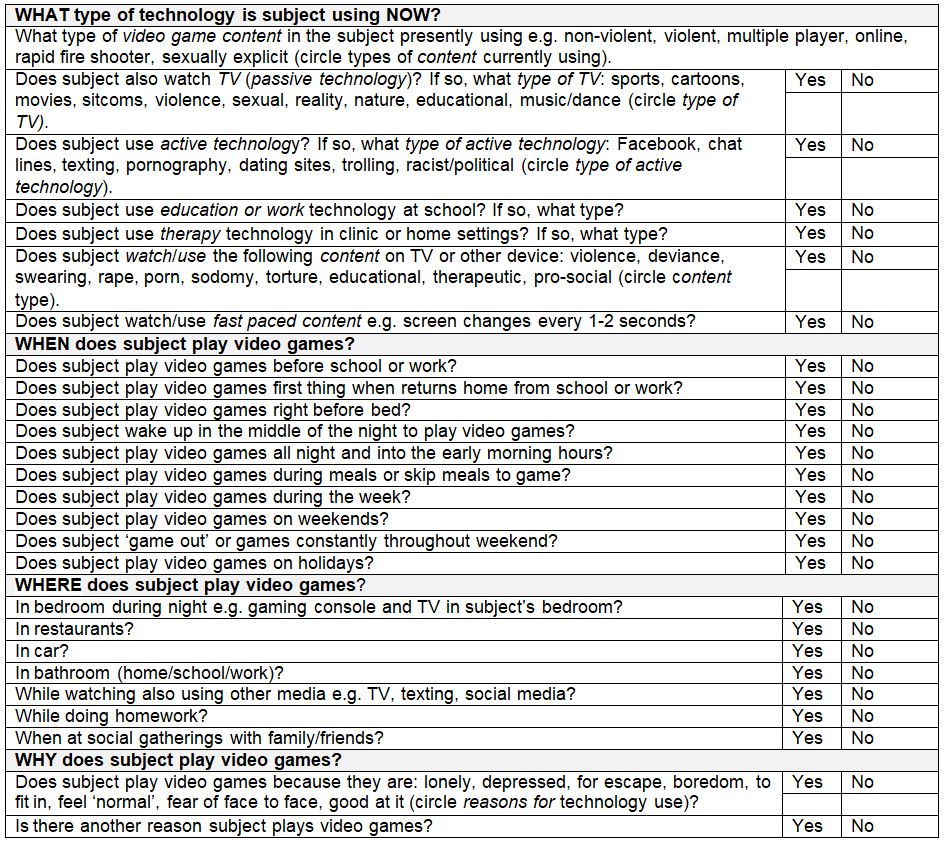