The dreaded case for an eye pathologist is to evaluate eyes for non-accidental trauma, also known as child abuse or “shaken baby syndrome”. T 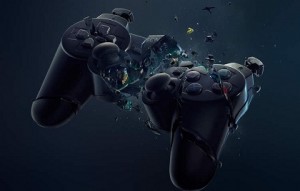 he hallmark signs for non-accidental trauma consists of intra-retinal hemorrhages in numerous retinal layers, hemorrhagic vitreous detachments, and bleeding into the optic nerve. As medical professionals, we screen for child abuse in our clinics and attempt to mitigate factors leading to child abuse in families. Unfortunately, there’s one growing cause for child abuse that is being overlooked by our society, rage associated with video gaming.

We compiled a collection of news reports illustrating the problem with gamer rage and childcare.

All parents can relate to the frustration associated with crying or fussy babies. The majority of parents have perspective to be calm and loving, even with the most demanding child. However, being under the influence of drugs or alcohol, caregivers’ judgment can be poor and potentially volatile because of poor perspective. Similarly, being under the influence of a video game obsession, or an outright addiction, and violent gaming are commonly ignored when investigating child abuse cases. There is increasing research supporting that playing violent video games lead to violent tendencies [7] and promote anti-social behavior. [8]

Gamers exhibit rage associated with violent games and online multi-player interaction because these games are simulators of violence. Gamers’ blood pressure may exceed 190/140 within 20 to 30 minutes of playing violent games, adrenaline levels rise preparing the gamer to fight-or-flight, and the brain is being stimulated for battle. While the body is preparing for epic battles, the release of this potential energy is expressed mainly through quick moving fingers and verbal angry outbursts, lacking true release for the rising fight-or-flight hormones. During real battles, this potential energy is helpful for survival, but during gaming this potential energy may manifest as outright, uncontrollable rage.

“These children participate in a subculture [violent online gaming] that encourages insults, bullying, and degradation. The goal seems to be to inflame other players, hoping to throw their game off balance, thus making them easier to kill. I had naively assumed that the headset would permit greater cooperation among teammates, but nothing of the kind took place. Far from encouraging team spirit and fair play, these headset-enabled online games often embitter those who play them. Many otherwise reasonable young men lose control. The kill-or-be-killed mindset and the endless verbal assaults create an overwhelming intensity that can spill over into real life. Mild-mannered Max played on the freshman football team, and did well in school. Yet, when he played Gears of War or Call of Duty for more than an hour a day, his behavior turned decidedly antisocial. The first incident occurred after Max had been playing for three hours. His mother had tried, unsuccessfully, to gently get him off the game. When she threatened to shut off the power, the fourteen-year old snapped: “You better ******* not!” He quickly and profusely apologized, but this was only the first episode. The last straw came when, after a four-hour gaming binge, he punched through the wall and broke his finger. At that point Max’s parents removed the Xbox from their home, and sought me out for counseling.” [9]

The above headlines illustrate stories of gaming rage and child abuse that made the news. What about abuse that did not result in death? What about all the near misses and real abuse that no one hears about? What about the secondary abuse of sibling witnessing rage on their siblings and marriage conflict over rage exhibited by their kids? Gaming rage results in lost opportunities for healthy family bonding, lack of healthy attachment in children, and in extreme cases, child abuse leading to non-accidental trauma.

Here is one story that did not make the news that Dr. Doan will share:

“Fourteen years ago, my daughter was only a few weeks old. I gladly volunteered to stay up all night to feed the baby, because I was a video game addict who stayed up all night playing 50-100 hours a week and was up anyways. While feeding her with a bottle, she had difficulty sucking on the bottle. I was extremely agitated because I had a crying, irritated baby. I was already sleep deprived from gaming through the night. At one point, out of frustration I shoved the bottle, extremely hard, in her two-week mouth. She was crying so hard she could barely breathe. I was on the brink of losing it because I wanted to go back to gaming as well as I was full of gaming rage. I tell this story to illustrate that I understand, as a gaming addict, as a father who’s been there, as a medical professional, and as a neuroscientist, the mental process that develops in the mind of a gaming addict and one who rages after playing games.”

The solution is to recognize that gaming rage and gaming addiction are serious problems in some individuals. As medical professionals, we should be thinking about the potential problems associated with problematic gaming and gaming rage in our medical practices, in our families, and in our communities. If you know gamers who are addicted or have problems with regulating their gaming, please seek professional help for them.

The following survey was published by a research study at the Iowa State University conducted by Douglas Gentile, PhD and is a useful screening tool to identify problematic gaming. [10]

Many times, the first signs of gaming rage and addiction will be seen by the non-gaming parent or spouse. Moms and wives are generally the first to be exposed to game associated anger and rage in the home.  Teen boys can find themselves on unsteady ground as they don’t fully realize the roller coaster of brain chemicals that are released when they are playing. Yelling outbursts are common not only at other gamers during immersive game play but also if the gamer is interrupted by a sibling, a parent or even a loss of internet connectivity at a critical point in his online battle. Some teens surprise and shock themselves as well as others in their homes over their lack of verbal control. Moms may also notice that the younger siblings cry when the older gamer comes in the room as the young child has been yelled at for interrupting the game and fears the gamer. The gamer may threaten harm to the younger child if the young child is left alone with the older gamer and tries to get near or touch his game. Parents may find holes in the sheet rock or other destructive signs of broken objects, controllers or computer screens. A general loss of empathy and patience for others and normal life situations by the teen gamer is also noticed first by parents.

Profanity is common in the hard core gaming world, and the gamer may be more prone to carry this over to real life while gaming. For the teen and adult gamer, one early sign of loss of control may be the use of foul language with the parent or spouse as a sign of inability to control impulses and show respect. Often times, physical abuse begins with verbal abuse. Rage will escalate as the protective layers of verbal control are compromised and physical abuse can more easily occur.  After failure of the first few attempts to yell at the crying child, the gamer moves to the next stage of control which may include irrational bodily harm to the infant so he can get back to his drug of choice at the time: the game.

Because of the way the brain is wired, transitioning from the digital world to real world after prolonged play can be very difficult, hence, the loss of immediate rational solutions for common household conflicts. Successfully moving from the game world to ‘crying baby’ world is very difficult as the pull of the game is so strong. Oscillating back and forth between these two worlds is a very challenging task. The gamer must intentionally leave his game to tend to the infant’s needs and when that sacrifice is too great tempers will flare.  When coupled with a lack of sleep, exercise, and food and an increase in game stress, pressures from online friends, isolation, and fight-or-flight brain chemicals, the result can be disastrous.

Video games are not all negative. Video game-adept individuals develop visual-spatial acuity, coordination, and skills in computers and technology. Research has also shown benefits in laparoscopic surgery  and solving complex scientific problems.   The answer is moderation and playing games that promote pro-social behaviors. For those who insist on the indulgence of violent games, the key is to recognize that rage can be a serious issue. As with any problem, recognizing the issue is the beginning to discovering the solution. The next step is educating people to help them make positive changes in their lives. For some, recognition of the problem and more education is enough to encourage a real change of behavior. For others who have experienced more pain and conflict around this issue, removing the gaming completely may be the best solution for a positive outcome.

For more information on how gaming causing conflict in the home, please go to www.realbattle.org

Melanie Hempe, RN: Mother and nurse. Melanie has over 10 years of expertise in video game addiction. She has presented in seminars to parents and worked with families to help them achieve a game free home and to reduce conflict in their families. Melanie has passion to help families achieve less conflict and to thrive in the digital age. Melanie is married to Chris and is a mother of four.