Part one in the Screen Tips series

Screen Tips for Tots is the first of a research referenced series on the impact of screen technologies on child body and brain development. Written by Cris Rowan, pediatric occupational therapist, biologist, international speaker and author of the book “Virtual Child”, Screen Tips will provide parents, educators and clinicians with research evidence which supports regulated and graduated use of screen technologies with children. Foundations for optimizing body and brain development across the age span from 0-18 years are discussed to help readers best understand the impact of screen technologies at different stages in development, and a variety of home, school and community initiatives are proposed to create sustainable futures for all children. The first article in Screen Tips series called Screen Tips for Tots focuses on the 0-3 years age group and is directed toward parents, daycare and preschool educators, and early intervention clinicians.

The majority of mammalian species gestation takes place primarily in the womb, with the ‘infant’ spending very little ‘training’ time with its parents after birth prior to entering the world to fiend for itself. Not so for humans. After 9 months inside their mother, humans get an additional 18 years of parenting to prepare them for adulthood. During this long period, infants become toddlers, toddlers grow into children, followed by tweens, teens, and finally emerge competent and confident to enter the world as independent beings. The level of self-sufficiency, well being and resilience achieved during these formative years is impacted to some degree by genetic make-up, but more so by the environment in which the child was raised. Enriched environments with stable, predictable and loving parents rich with essential developmental components including freedom to move, intentional touch, human connection and exposure to nature create a child who can grow and succeed (see Building Foundations graphic below). Impoverished, screen-centric environments with unpredictable and disconnected parents, create a much different child, a child who will struggle with meeting developmental milestones feeling insecure, anxious, and depressed. Clearly, the ways in which we are raising and educating children with screen technologies are not sustainable (see Virtual Futures graphic below). Understanding child body and brain development at different stages is essential to comprehend the profound impact of sedentary, isolated, overstimulated and neglected environment caused by screen overuse. 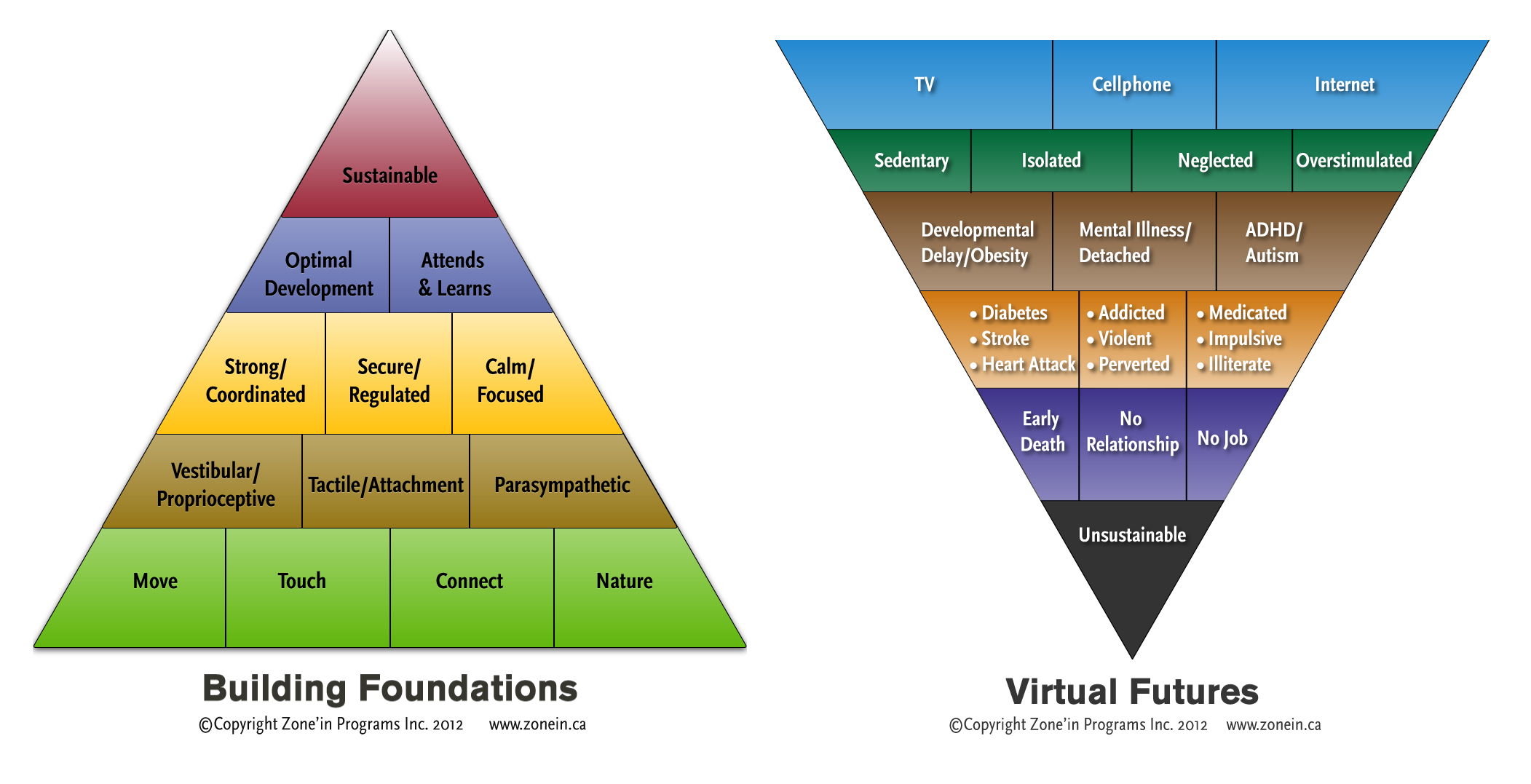 When an infant is finally born at 9 months gestation, they have already formed their full complement of neurons visualized as interconnecting ‘roads’ which traverse to every region of the brain. From birth to death, two neurodevelopmental processes take place based on the environment surrounding the child; pruning and proliferation. Neuronal pruning is a ‘brain efficiency’ process where the neuronal tracks which are used are preserved, and the tracks that aren’t used are cut or pruned, making the brain more efficient. The adage “Use it or loose it” rings true in brain development theory which is accelerated in young children tapering off in adulthood. Neuronal proliferation is a ‘brain connectivity’ process where the neurons grow synaptic connections between neurons effectively connecting the whole brain in the shortest distances possible. Between the ages of 0 and 2 years, an infant’s brain triples in size with a rapidity of pruning and proliferation which is truly remarkable. If the infant is immersed in an enriched environment of movement, touch, human connection and nature, neuronal pruning and proliferation will ‘wire’ the infant’s brain for optimal growth and future success. If the infant’s world is one of being ignored and restrained while watching screens strapped into bucket seats and strollers, neuronal pruning and proliferation will look much different. Overuse of screens at an early age wires infant brains instead for impulsivity and cognitive deficits, resulting in impaired attachment, attention deficit, poor self-regulation, and global developmental delays.

While brain wiring is somewhat ‘plastic’ throughout human life, neuronal damage caused by early overexposure to screens is permanent and consequently, cannot be reversed.

While most people are familiar with the cardiovascular benefits of movement regarding fitness, obesity and diabetes prevention, few think of movement and its impact on attention and learning. Movement activates two sensory systems which enable eventual coordination and literacy: proprioceptive and vestibular. The proprioceptive system located in the joints and muscles is activated by heavy work or resistance type stimulation such as pushing, pulling, lifting, or carrying. Examples of proprioceptive rich activities are crawling, pulling to a stand, climbing up onto structures, or dragging heavy toys. Parents and educators who restrain toddlers by handing them a device limit proprioceptive development thus impacting foundations for eventual gross and fine motor proficiency needed for printing, reading and sports. The vestibular system (often referenced as the ‘inner ear’) located in the brain is activated by off-centre movement such as spinning, linear rocking, jumping, and swaying side to side. Examples of vestibular rich activities are rocking while holding toddler, bouncing on lap, careful tossing in the air, merry-go-rounds, swings and slides. Parents and educators who fail to allow unrestricted movement limit vestibular development thus impacting foundations for eventual motor coordination proficiency needed for printing, reading, and sports. Safety initiatives while essential should never replace the need for unrestricted movement.

When you hand a toddler a device, they sit; when you take it away, they get up and move. Children are designed to move, not sit.

Tactile stimulation is a biological necessity without which, children die. Essential for activating the parasympathetic system to reduce adrenalin and cortisol, when we touch other humans, we enact a soothing mechanism resulting in a secure and calm toddler. Touch is a form of communication emanating empathy and concern and lets children know how much we care about them. Cuddling and rocking infants and toddlers to sleep or during feeding has long-term benefits of sustained sleep, less colic, and less crying while awake. Many cultures carry their infants and toddlers wrapped on their bodies allowing constant touch and human connection. Parents and educators who don’t carry infants and toddlers, instead relying on soothing devices such as tablets and TV’s, vibrational or rocking baskets, jumping harnesses, or strollers, are depriving their children of life sustaining touch resulting in long-term insecurity and anxiety.

While soothing devices provide ‘short-term gain’ they will result in ‘long-term pain’ as the child is not getting what they need, caregiver touch.

When an infant is born into their family their “job” is to form an attachment with their primary parent, as this attachment will provide them with essential elements to survive. The baby learns quite quickly a variety of gestures to cue the parent to their needs, primarily crying, but also smiling, imitating, and responding to parent’s facial cues. How easily a baby settles into a sleep and feeding routine is reflective of how relaxed they are with their parental attachment. A baby who has all their needs met in a loving and reciprocal relationship early on in the ‘attachment dance’, doesn’t need to work as hard or worry as much about whether or not their needs will continue to be met. A baby who is repeatedly signalling their needs to the parent but the parent either neglects them or is unpredictable in their attentions, learns they need to work harder to get their survival needs met e.g. crying louder and longer, or alternatively, withdrawal. Every time a parent or caregiver picks up their cell phone or watches TV in the presence of an infant or toddler who is expressing themselves (smiling, crying), the child feels rejected, unseen, unheard. Rejection is a profoundly disturbing feeling which creates an impenetrable wall between parent and child completely derailing attachment formation and creating the foundations for a lifetime of misery and mental illness.

Biologically speaking, humans are ‘pack animals’ who don’t survive well when isolated from their pack. Put down your phone and pick up your kid.

When we recall our fondest most memorable experiences, we were often playing outside. Nature is rich in sensory stimulation, whether it be the gentle touch of wind on our face or grass under our feet, beautiful images of trees and flowers, or sounds of running water or waves. Being in Mother Nature activates the parasympathetic nervous system (as does touch) to lower adrenalin and cortisol and elicit peaceful calming and relaxation. Today’s children spend 95% of their time indoors with “fear regarding safety” cited by parents and caregivers as most frequent excuse for not taking children outside to play. While an infant or toddler would much prefer looking out a window than a screen, parents routinely give them the later. I was recently in a home with a young infant which contained a large screen and small window which looked out over a beautiful back yard and suggested moving the big screen to another room and enlarging the window. I envisioned the infant (now toddler) learning to stand by pulling herself up on a window ledge (proprioception) only to discover natures most wonderful attributes right in front of her eyes. Hours and hours of developmentally rich life enhancing entertainment would be available to her just by looking out the window instead of growing up in front of a screen. If we can manage to preserve Mother Nature and make sure children get outside more to enjoy her, nature will serve to be the healer, the ‘counter effect’ to damage caused by sedentary overstimulation from screens.

The following Technology Use Guidelines for children and youth were developed by Cris Rowan pediatric occupational therapist and author of Virtual Child, Dr. Andrew Doan neuroscientist and author of Hooked on Games and Dr. Hilarie Cash, Director of reSTART Internet Addiction Recovery Program and author of Video Games and Your Kids, with contribution from the American Academy of Pediatrics and the Canadian Pediatric Society in an effort to ensure sustainable futures for all children.

Cris Rowan is a pediatric occupational therapist, biologist, international speaker and author of “Virtual Child – The terrifying truth about what technology is doing to children”. Cris is CEO of Zone’in Programs Inc., collates research for the monthly Zone’in Child Development Series Newsletter, and writes a feature article for her blog Moving to Learn