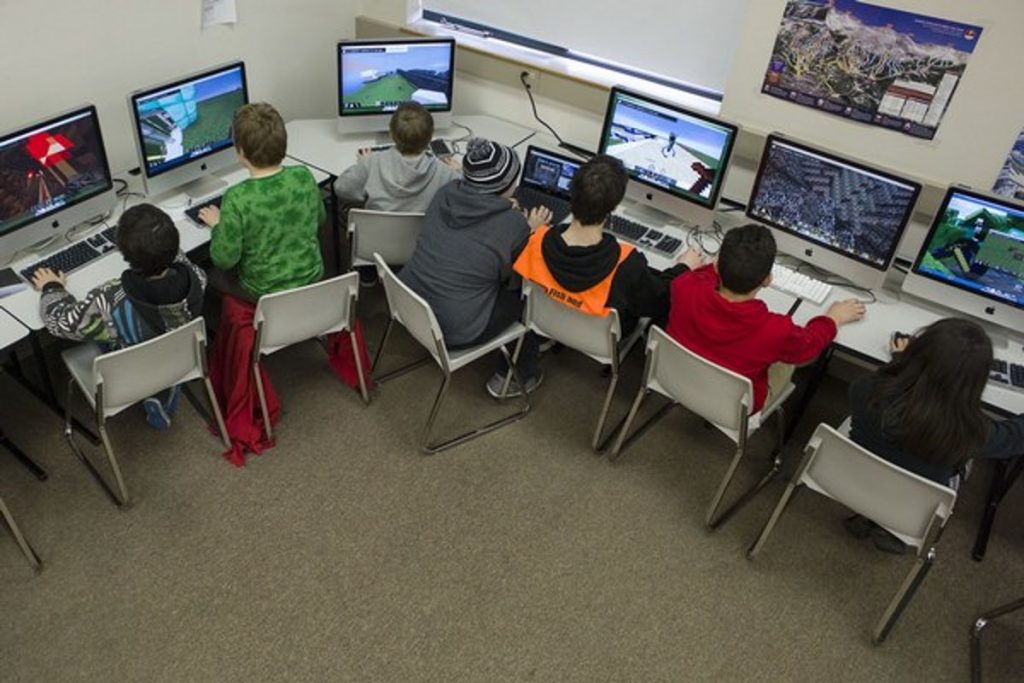 Increased use of cell phones and tablets in schools has reached a point of no return, as evidenced by education government’s refusal to fund books. While parents like to think these devices are being used for educational purposes, quite often they are on social media or playing video games. Teens now log in an average of 9 hours per day of entertainment technologies at home, and then continue this mindless entertainment at school. Student gamers who arrive at school late, or not at all because of late night gaming, are generally unmotivated, sleep deprived, and attention deficit. Engaging these “gamer brains” has become a far-reaching and often desperate challenge for many teachers. Technology management policy in schools is either non-existent or grossly inconsistent between teachers, allowing students to do whatever they please with their devices. Defiance of authority is now endemic in schools, leaving teachers to increasingly barter school work for screen time. While using screens as a reward for work might provide ‘short term gain’, the ‘long term pain’ is dubious and can prove to be potentially harmful.

Dr. Andrew Doan M.D., PhD, a researcher on video game impact and author of “Hooked on Games” states “The research shows that digital media and video games are as potent as controlled narcotics in clinical medicine where we scrub burns off of burn-patients while they play video games. So therefore, are you comfortable with substituting digital media and video games with pot-laden brownies or crack-laden brownies to get your students to come to school?” A quick review of recent research and events will help teachers understand the cumulative effects of using screens as rewards in schools. A 2017 study of grade 8-12’s showed significant increased mental illness and suicide risk in teens with high screen usage, citing social media and gaming as causal factors. A 2010 meta-analysis of over 1000 studies showed video games increase incidence of aggression and oppositional defiance. In 2017 the World Health Organization designated “video game disorder” as a mental illness. Sleep deprivation was termed “epidemic” in children and youth in 2016, as was obesity and diabetes in 2015, both citing screen overuse as causal factors. In 2016 the National Toxicology Program completed preliminary studies showing cancer in rats exposed to wireless radiation. In 2017 France banned all cell phones from elementary and high school settings. As problematic behaviors and delays in child development soar, so does the number of students requiring support for learning difficulties. Education governments continued funding of support services for these students will quite literally ‘break the bank’, if it hasn’t already.

Understanding problematic student behavior and the rising incidence of defiance, poor motivation, attention deficit, and refusal to do work requires a systematic review of underlying causal factors; rewarding these behaviors with screens only confuses the issue. The following are just a few questions which might help teachers better understand underpinnings to behavior.

As we gain more information about why students are refusing to do work, we are better prepared to help them. Studies (and common sense) both indicate that using rewards rather than punitive measures can be an effective and efficient way to change behavior e.g. give them something, instead of taking something away. When considering what type of rewards are best practice, think about rewards that are valued by both student and teacher, for example extended recess or gym times, playing board games, or time spent in a leadership role with younger children e.g. recess or gym supervision, building an outdoor obstacle course. Rewarding students with screens not only lacks intrinsic value, it can prove harmful as evidenced by previously cited research. Students who refuse movement-based activities are common in today’s sedentary world resulting in poor fitness levels, lack of confidence in motor skills, and obesity. Consequently, teachers might consider identifying movement based activities that are within the skill set of students e.g. treadmills, elliptical, rowing machines, and then create conditions where the student wants to participate, without rewards. Use of devices which measure personal gains, as opposed to comparative measure with other students, help build intrinsic values e.g. step meters, heart monitors, loss of weight. Promoting intrinsic rewards that are healthy is always better than providing extrinsic reinforcers. Bottom line is rewarding a movement activity with sedentary reinforcers such as screens, is akin to pouring gas on a fire e.g. you’ve just negated the gains made with movement.

In summary, rewarding children with screens is never recommended, especially with students who are already overusing screens or showing signs of addiction e.g. preferring screens to healthy activities. It’s imperative for schools to first take a screen usage history including duration and content, as well as a sleep history. Second, try to determine the underlying causal factors for associated problematic behavior. Use this information to determine a behavior management plan that is reward based without use of screens. You can do this.

This article was written by Cris Rowan, pediatric occupational therapist and author of “Virtual Child – The terrifying truth about what technology is doing to children”. Cris works in school-based settings providing consultation and workshops on screen management to teachers and students. Cited research can be located at www.zonein.ca under Fact Sheet. Cris can be reached at info@zonein.ca.

The views expressed in this article are those of Dr. Andrew Doan’s and do not necessarily reflect the official policy or position of the Department of the Navy, Department of Defense, or the United States Government.