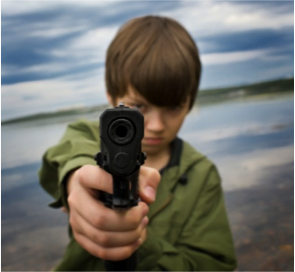 Hearts everywhere go out to families and friends of victims of the mass killing at Sandy Hook School. Bewildered as to why the shooter did such a heinous crime, society is quick to assign blame to poor gun control or too much video gaming, without really giving any consideration to the profound complexity of this issue. Clearly the shooter is the problem, not guns or video games, and determining causal factors is not black and white. Obsession with guns, or compulsive use of video games, are not problems in and of themselves, but should be looked upon as symptoms of underlying problems, which deserve careful examination. If parents, education and health professionals better understood some of the problems that cause children or youth to develop unhealthy attachments to guns or video games, they could intervene in a preventative manner, and stop a “gunner” or a “gamer” from turning into a “shooter”. Trying to control guns or video games to stop shooters, is only looking at the tip of a very large iceberg, one that is growing incrementally.

When trying to identify potential shooters, consideration should be given not only to their personal characteristics, but also to parameters of their gun obsession or video game compulsion e.g. who, what, when, where, why and how. Is the person in question a social isolate, who plays only rapid fire shooter games, is addicted to video games, has dropped out of school, doesn’t work, is neglected or abused by parents, uses games or guns incessantly, and has no interest in any other activities – or – does the person have friends, a variety of leisure pursuits, plays sports-type games, plays outside in nature, attends school or work, has a good relationship with parents, and uses guns or games only on weekends? These are two totally different gunner and/or gamer profiles, and while the first profile might become an eventual shooter, all would likely agree the second wouldn’t. So why do some children grow up healthy and succeed in life, and others struggle with mental illness, and end up in prisons?

A widely held belief is that children aren’t born “bad” or mentally ill, society makes them that way. Studies indicate that the quality of the primary attachment between child and parent(s), set the stage for eventual successful social relationships and mental health. Neglect and abuse dramatically alter brain development, which in turn impacts on behavior. Identifying and understanding problematic family relationships early in a child’s life, and providing necessary support and care, could go a long ways toward resolving many of the issues faced by today’s youth. Of note in this most recent shooting is the shooters mother was killed (presumably by the shooter), and the home computers were destroyed (presumably by the shooter – or – possibly by the mother, who then was shot in retaliation). These incidents bring to mind Daniel Petric, a 16 year old who shot his mother and father because they took away his X-box. During trial proceedings, Daniel said to the judge “I thought they would come back to life”. Blurring of fantasy and reality is an indication that a child sees themselves as an actual character in a video game, and has a consequent malformed self-identity. Consequences for actions would be difficult to determine while immersed in virtual reality, as would self responsibility and empathy.

Until researchers take the opportunity to look under the surface, and attempt to answer the harder question about why some gunners and gamers become shooters, politicians who act to control guns and video games are just taking shots in the dark.

Cris Rowan is a pediatric occupational therapist and child development specialist. Cris is author of “Virtual Child – The terrifying truth about what technology is doing to children” and resides in Sechelt, BC, and is passionate about changing the ways in which children use technology.

2 Responses to “Gunner, Gamer or Shooter – Which one can be controlled?”